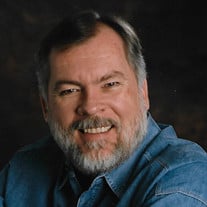 Dennis Smith Cox, 72, of Bolingbrook, IL, passed away Wednesday, July 1, 2020. Dennis was born on April 30, 1948 in Delta, Utah to William Smith Cox and Helen Marie Bliss. He was the second of their six children. Dennis grew up in Southern California and graduated from Royal Oak High School. As a young man, he served a two year mission to the Andes South Mission for The Church of Jesus Christ of Latter Day Saints. As a missionary, he learned to speak Spanish fluently and taught the people of Columbia, Peru, Ecuador and Venezuela. Throughout his life, he continued to speak the Spanish language so beautifully, that many who spoke with him believed it to be his native tongue. After faithfully completing his mission, he attended Brigham Young University where he met his eternal sweetheart, Eileen Jo Tracy. Dennis and Eileen were sealed on April 1, 1970 in the LDS Manti Temple in Manti, UT for time and all eternity. Their family grew to include two sons and a daughter and for a short time in Missouri, they opened their home to foster 27 children who needed loving parents. Throughout their marriage they moved many times, California, Utah, Missouri, Colorado, Kansas, Texas and Illinois but Missouri always felt like home. He was full of love and joy for his family. As a husband, he could always be found trying to lighten the load of his sweetheart. As a father, he taught his children the value of hard work, seeing things through to the end and most importantly, that he would always be there for them, no matter what. Dennis found joy in the simple pleasures of life. He enjoyed listening to John Denver’s soothing tenor voice, chewing on a cup of ice, eating “Grandpa’s Magic Beans” (dark chocolate peanut M&M’s) and laughing at his mischievous ideas, of which he had many. Dennis had a deep rooted love of the gospel of Jesus Christ. He loved teaching, whether it be in a formal setting at church or in the homes of the many families he was a Home Teacher for, often quoting his beloved Bruce R. McConkie. While Dennis may have had a gruff exterior, those who had the pleasure of knowing him could see the kind and tender hearted man he truly was. He could often be found quietly serving others, always looking for those opportunities to ease the burdens of another. His favorite song, “Give, Said the Little Stream” taught that everyone, no matter how big or small, has something to give, and he exemplified that in his every day life, trying to serve as the Savior did. Dennis is survived by his sweetheart of 50 years, Eileen, two sons Monte William Cox and his wife Sandra, Jared Richard Cox and his wife Monica, and one daughter, Erin Michelle (Cox) Simmons and her husband Michael, fifteen grandchildren, Courtney, Sydney, Delayney, Griffin, Gavin, Daphney, Porter, Carter, Riley, Chloe, Peyton, Stryker, Caitlin, Faryn and Tessaleigh and by three great grandchildren, Kennedy, Grayson and Emily, all of whom will miss him dearly. He is also survived by his brothers Dee and Jimmy and sisters Pam and Allison. He is preceded in death by his parents and brothers Mike and Pat. On Tuesday, July 7, 2020, there will be a visitation at the McCauley-Sullivan Funeral Home located at 530 West Boughton Road, Bolingbrook, Illinois from 6:00 – 8:00 pm. On Saturday, July 11, 2020 there will be a viewing at 9:00 am with services to follow at 10:00 am at the Dickey Funeral Home at 2401 East Mechanic, Harrisonville, Missouri. Internment will be immediately following the funeral services in Peculiar Cemetery in Peculiar, Missouri.

Dennis Smith Cox, 72, of Bolingbrook, IL, passed away Wednesday, July 1, 2020. Dennis was born on April 30, 1948 in Delta, Utah to William Smith Cox and Helen Marie Bliss. He was the second of their six children. Dennis grew up in Southern... View Obituary & Service Information

The family of Dennis S. Cox created this Life Tributes page to make it easy to share your memories.

Send flowers to the Cox family.