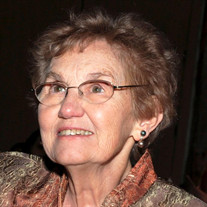 Dolores J. Sanhamel (nee Michaels), 91, of Bolingbrook; loving wife of Richard Sanhamel for 54 years, beloved mother of Mark (Pamela) Sanhamel; cherished grandmother of Ryan and Shane; devoted sister to the late Robert (Dianne) Michaels. Fond sister-in-law to Dianne (Thomas) Huestis, Marilynn (the late George) Schwinn, Linda (Lawrence) Esbjorn, the late Gregory (Kathleen) Baker. Dear aunt to Michelle (Anthony) Michalowicz, Deanne (Carl) Czarnik, Robert (Christine) Michaels, John (Joanie) Schwinn, Julie Gleason, James (Tracey) Schwinn, Karen (Anthony) Moore and Thomas (Carolyn) Baker. Born in Oak Park, IL, she was the daughter of the late Elmer J. and Marguerite C. (Standiford) Michaels. She was devoted to the care of her parents in their later years. Dolores attended Austin High School and was the president of the Senior Girls Glee Club. Through the years, she worked at a variety of places including Brach’s Candy, Marshall Field’s, Northern Trust, The Met and was working at Continental National Bank in Chicago when she met Richard Sanhamel. Their first date was at The Berghoff Restaurant. They were married in the Chapel in the Sky in Chicago on November 4, 1967. One of her proudest moments was giving birth to their son, Mark in 1971. Then in 1972, Dolores and Richard built their new home in Bolingbrook. Throughout her life, she treasured the opportunities to travel including trips to China, Europe, Hawaii and throughout the United States. Dolores sang in community choirs in Chicago and Bolingbrook. She was delighted when daughter-in-law Pam joined the family in 1996. The births of her grandsons, Ryan in 2004 and Shane in 2007 provided her tremendous joy. Dolores was a caring wife, mother and grandmother who provided unconditional love and support. She will be remembered for her devotion to family and her beautiful singing voice. Visitation on Saturday, March 5 from 9 am - 12 pm with a Memorial Service at 12 pm at McCauley-Sullivan Funeral Home, 530 West Boughton Road in Bolingbrook. Private burial and interment will be Monday, March 7 at Mount Emblem Cemetery in Elmhurst.

The family of Dolores J. Sanhamel created this Life Tributes page to make it easy to share your memories.

Send flowers to the Sanhamel family.