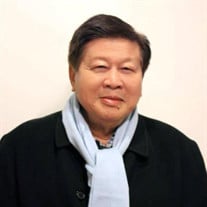 Edmundo “Eddie” Pabilona Ty, 83, beloved husband, father, grandfather,(Angkong), brother, uncle, and friend passed away peacefully on Wednesday, October 13, 2021, in Bolingbrook, Illinois. Eddie’s life was an interesting and meaningful life, filled with much love for and devotion to his family, friends, and community. He had a brilliant “math” mind that he applied to his career and as an entrepreneur. Eddie was the son of Teodora and Ong Hing Ty (both deceased). He is survived by his loving wife, Marina Maldonado Ty; son and daughter-in-law, Edison and Mimer; daughter and son-in-law, Mylene and Arthur; daughter and son-in-law, Melanie and Sonny; son and daughter-in-law, Erwin and Catherine; and seven grandchildren, Justin and Faith, Jomai and Eggie, Ayen and Zaniel, and James; and two great-grandchildren, Raphael and Dyland. He is also survived by his two brothers Henie and Tino, four sisters Luming, Esther, Imelda, and Edith, and their families, as well as many close friends and relatives in the Philippines, Italy, and Australia. Eddie was born in San Pablo City, Laguna, Philippines on February 19, 1938, few years before the second world war. His family had a difficult life in the war-ravaged Philippines in the early 1940s. With tears in his eyes, he fondly tells the story as a child during the war. While crying, he will tell his older brother Kuya Eusebio (deceased) that he is hungry. Kuya will climb up a coconut tree to get food for him. He said, I will not be alive today without the help of my Kuya. In the midst of poverty, he established himself as a young entrepreneur. He told the story of selling stuff like ice creams at bus stops and railway stations. He was a talented math student at Ateneo de San Pablo, where he recalled he was often surrounded by high school students, who sought out his help solving their math problems. Going to college was not an easy feat. He supported himself, his parents, and his siblings while working as a stevedore (kargador) in a soap factory in San Pablo. With his firm determination, he finished the degree in Bachelor of Science in Commerce in San Pablo City Colleges. After getting his college degree, the same factory promoted him as one of its salesmen. Later in his life, Eddie set up his own business, establishing a small store in San Pablo – a reflection of his entrepreneurship traits and his way of helping his community. Eddie and his wife along with their youngest son Erwin migrated to the US in 1997. He migrated to provide an opportunity for his son. Though some considered Eddie a man of few words, nobody denies he was a man of many good deeds. He puts his family’s welfare ahead of himself. He devoted his life to his family and “to ensure that my children won’t suffer the same hardships as I experienced”. He will surely be missed but he will always be remembered and will be etched in our hearts forever. Visitation is scheduled for Saturday, October 23, 2021, from 3 p.m. until 7 p.m., at McCauley-Sullivan Funeral Home and Crematorium, 530 W. Boughton Road, Bolingbrook, Illinois 60440. Funeral Service will take place at 5 p.m. A LiveStream will be available prior to and during the funeral service. Interment private. For those of you who cannot attend the funeral services for Mr. Ty, please use the following link to a Google Sheet document in order to sign in and even share a message to the family. When you finish signing in, you can close the document. https://docs.google.com/spreadsheets/d/1hmmpvOKuince37larUGkcdTaBL-f2ieAXrVw14Kt7no/edit?usp=sharing Funeral arrangements entrusted to McCauley-Sullivan Funeral Home & Crematorium.

The family of Edmundo P. Ty created this Life Tributes page to make it easy to share your memories.

Send flowers to the Ty family.