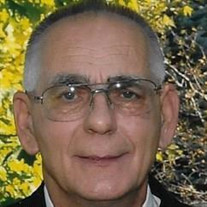 On Thursday, December 5, 2019 Ernest T. Sutterlin, loving husband, father and grandfather passed away unexpectedly at Bolingbrook Hospital at the age of 72. He was with his family at the time of his passing. He had been a resident of Bolingbrook, Illinois for over 32 years. Ernie was born on May 18, 1947 in Chicago, Illinois to Ernest S. Sutterlin and Julia (Paulik) Sutterlin. On May 17, 1975, after a whirlwind courtship, he married Victoria J. Ogrodnik and from that union they had their daughter Teshia Helene. Ernie was a “jack of all trades”. He loved to tinker with things. He was always inventing some gadget or making improvements on existing tools in order to make a task more efficient. In his early years, he had a talent for drawing and sketching. Ernie always loved watching movies, especially Godzilla and scarey movies and looked forward to Friday date night at the movies. He enjoyed cooking, baking as well as barbecuing on his grill and creating new recipes. Later, he became an avid video gamer. You would often see him with his IPad watching movies, playing games or one of his favorite things to do was to research topics of interest. His passion was his beloved dogs and he became an animal rescue advocate. Ernie loved his family with a deep conviction. Ernest was preceded in death by his father Ernie, mother Judy and his sister Diane Stefanik. He is survived by his wife Victoria, his daughter Teshia Zubek (Martin), his grandsons Benett, Lincoln, and Harrison Zubek, his sister Pam Wojcik, his brother-in-laws Ernie Stefanik, Marty Wojcik, and Mike Ogrodnik, his sister-in-law Karen Ogrodnik, and his nephews and nieces. In lieu of flowers, we are accepting donations to be given to The Humane Society, Humane Haven and ASACP.

On Thursday, December 5, 2019 Ernest T. Sutterlin, loving husband, father and grandfather passed away unexpectedly at Bolingbrook Hospital at the age of 72. He was with his family at the time of his passing. He had been a resident of Bolingbrook,... View Obituary & Service Information

The family of Ernest T. Sutterlin created this Life Tributes page to make it easy to share your memories.

Send flowers to the Sutterlin family.