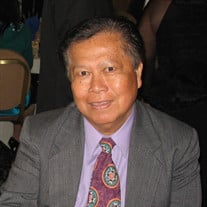 Felix A. Sumatra, age 82, was called to his home in glory – a place that he has dreamt about and longed to be - on May 14, 2021. He was born on February 20, 1939 to Urbano and Cayetana Sumatra in Rizal, Laguna, Philippines. A man of deep faith and conviction, he taught his 5 children and 14 grand-children (+ 2 great-grandsons) beautiful hymns, the meaning of Christian service and the hope of eternal life with his Heavenly Father. His greatest attributes were his wit, his intelligence and a fantastic sense of humor. He was the constant prankster who delighted in good-natured teasing which he often showcased with each of his grandchildren. During his young adult years he proved his intelligence and hard work while enrolled simultaneously at Centro Escolar University and Manila Bible Seminary. He worked at his optometry practice during the week and on the weekends was preaching at the pulpit at area churches in the Philippines. For nearly 57 years he kept his sacred marriage vows to his beautiful bride whom he saw at a crowded Christian youth rally. Through sickness and health and good times and bad, his devotion to his bride was unwavering, most especially during the last year when her own health has declined. At the age of 33, he fulfilled his dream and ambition for a better life in the United States. He sacrificed his practice and an unavoidable separation from his wife and children so that he could establish citizenship in a new and foreign country. This self-less act afforded his family a good life. Though sadness is expected because his physical presence is no longer with us, the family rejoices knowing that he was met at the pearly gates by his family and friends who went before him, that he is walking the streets of gold, and that he is singing hymns to his Father who we know embraced him saying , “Well done, my good and faithful servant”. Felix is survived by his wife, Cherami, his children Daisy Simeon (Rando), Allan (Evy), Orrin (Kyong-Hwa), Eileen Conners (Kevin), Lowell (Kari), grandchildren Brandon (Ali), Hannah (Tanner), Cameron, Savannah, Matthew, Austin, Tara, Ethan, Madison, Cody, Amelia, Ava, Zachary, Mallory, great-grandchildren Keo and Kolt. He will also be fondly remembered by his best friend and cousin, Mando Ticzon as well as numerous extended family and friends he touched throughout his lifetime. Funeral arrangements entrusted to McCauley-Sullivan Funeral Home & Crematorium.

The family of Felix A Sumatra created this Life Tributes page to make it easy to share your memories.

Send flowers to the Sumatra family.