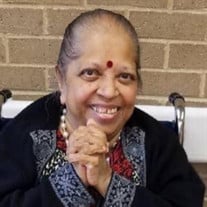 Hemlata passed away on July 22, 2020 at Elmhurst Memorial Hospital. The Pooja service will be private. View the Pooja service live on Friday, July 24th, 2020 at 12:00 noon US CST by going to https://livestream.funeralscreen.com/mccauley-sullivan/hemlata-rathod/ Hemlata (Hema) Rathod, 78, of Naperville, peacefully passed from this world on Wednesday, July 22, 2020 of pneumonia in Chicago, Illinois. Hema was born January 12, 1942 in Ilav, Surat in the state of Gujrat India. Hema grew up on a beautiful estate in KIM, district of Surat, India with her 6 siblings. In 1960 she married Balkrishna Rathod and moved to Kuwait where they lived till 1987 when they moved back to Mumbai. Hemlata was the proud mother of 3 beautiful children: Himanshu (1960), Nainesh (1964) and Nisha (1968). In 1990, after she lost her husband, Hema moved to the United States to be closer to Nisha and Nainesh and their families including her four grandchildren, Keshav, Anand, Maneka and Braxton, who were the joy of her life. Hema lived in Naperville with Nisha and Chetan where she played an active part in the community and her Swaminarayan temple. Hema was a wonderful mother and grandmother. She spent much of her time helping with her beloved grandchildren. She also was a renowned cook and is famous for her potato and mince patties (a favorite of her grandchildren) and her wonderful Indian cuisine, which she liked to make a little spicey . When she moved to the US she enjoyed keeping up with Bollywood movies and Indian soap operas. Hema is survived by her daughter and son-in-law, Nisha and Chetan Tanna, of Naperville, Illinois; her grandchildren, Keshav and Anand Tanna of Naperville, Illinois, and Sandy Rathod of Netherlands the mother of Maneka Rathod of Denver, Colorado and Braxton Rathod of St Louis, Missouri. In addition, Hema had a large extended family in India and throughout the world. Hemlata was preceded in death by her husband, Balkrishna Rathod; and sons, Himanshu Rathod and Nainesh Rathod. We are grateful they are reunited now in Akshardham (Heaven). Hema will be deeply missed by all who had the privilege of knowing her, especially her family all around the world. A Celebration of Life Ceremony will take place at 12 noon (US Central Time – Chicago) on Friday, July 24, 2020, at the McCauley-Sullivan Funeral Home in Bolingbrook, Illinois. The memorial service will be streamed live at the below link, so her family around the world can celebrate her life https://livestream.funeralscreen.com/mccauley-sullivan/hemlata-rathod/ In lieu of flowers we request contributions to be made to Hema’s devotion to Swaminarayan temple a nonprofit organization YDS, 2437 Yeoman St, Waukegan, IL 60087

Hemlata passed away on July 22, 2020 at Elmhurst Memorial Hospital. The Pooja service will be private. View the Pooja service live on Friday, July 24th, 2020 at 12:00 noon US CST by going to https://livestream.funeralscreen.com/mccauley-sullivan/hemlata-rathod/ Hemlata... View Obituary & Service Information

The family of Hemlata Rathod created this Life Tributes page to make it easy to share your memories.

Hemlata passed away on July 22, 2020 at Elmhurst Memorial Hospital....

Send flowers to the Rathod family.