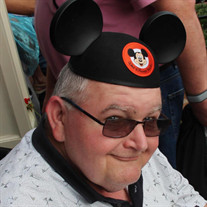 James F. Peters, Sr. passed away on February 4, 2021 at the age of 72. He is survived by his wife Dorathea (Pethes) Peters, his children James Peters, Jr. and Jennifer (Shaun) O’Brien, and 4 half siblings. He was the proud grandfather of Shelby, Zach, Boru, Ronan and Niamh (“Nia” as he called her). He was preceded in death by his brother Edmund Peters, parents Tommy Peters and Helen (McLin) Ferry, and sister Caffy Ferry. James was born and raised in Louisiana. He joined the Navy in December of 1967 and met his wife in February of 1967, they married in 1969 and eventually settled in Illinois where he lived the rest of his life. His accent faded, but his love for Louisiana never did. He worked many jobs throughout his life, most notably an art teacher, a White Hen Pantry owner, and finally a Red Wing Shoe manager. James, “Crazy Cajun”, “Redwing Shoe Man”, “Jim” Peters was fond of many things throughout his life—art, fishing, playing cards, watching movies (especially really bad sci-fi ones), dogs, a cat (albeit reluctantly), and food—to name a few. But most notably, he was fond of people. He was outspoken, crazy at times, even irritating, but lovable. There wasn’t a person he met that doesn’t have a Jim story. In lieu of flowers, please consider making a donation to Midwest Greyhound, through which Jim and his wife have fostered and adopted several greyhounds, or to his home church New Life Lutheran in Bolingbrook. Visitation Monday February 8th, 11:00am-1:00pm at McCauley-Sullivan Funeral Home 530 W. Boughton Rd. Bolingbrook, IL. Private Interment will take place.

James F. Peters, Sr. passed away on February 4, 2021 at the age of 72. He is survived by his wife Dorathea (Pethes) Peters, his children James Peters, Jr. and Jennifer (Shaun) O&#8217;Brien, and 4 half siblings. He was the proud grandfather... View Obituary & Service Information

The family of James F. Peters Sr. created this Life Tributes page to make it easy to share your memories.

Send flowers to the Peters family.