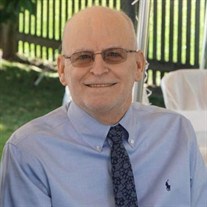 James Lawrence Smith (age 61) of Bolingbrook, IL passed away at his home on Friday, May 24th. He is survived by his wife, Mary Elizabeth Borio-Smith and four children, James (28), Nicholas (25), Thomas (24), and Douglas (21) as well as four of his brothers (Frank, Raymond, Charlie, and Daniel) and many nieces and nephews. James Lawrence Smith was born September 3rd, 1957 in Britt, IA. He grew up in Buffalo Center, IA on the farm with his 5 brothers (Frank, Raymond, Charlie, Patrick (deceased), and Daniel) and his late parents (Raymond Anthony Smith, Sr and Mary Ruth Murray Smith). He was actively involved in sports growing up and in high school, including football and basketball. From a young age, he always loved to laugh and have a good time, frequently being at the center of many practical jokes with his brothers and friends. He had an infectious laugh and brought so much joy to those around him. He graduated from Drake University in 1979 with a degree in Business Management and then had a very successful career in management at Jewel-Osco for 24 years. Family was always his priority throughout his life. He was a loving son, brother, uncle, husband, and father. Him and his beloved wife, Mary, became lifelong partners in 1988 and were married for 31 years. Once he became a father, his number one priority and his biggest pride and joy turned to his four boys who he helped transform into men with his wife, Mary. His wife worked during the day while he worked during the night. This provided his children with a uniquely nurturing, loving environment at all times. He dedicated endless hours to coaching his children in youth sports, helping with homework, capturing family memories and developmental milestones on video and camera to cherish forever, and keeping the house standing with his sidekick “Bob the Builder” (his youngest son Douglas) by fixing literally everything and anything in and around the house. Prior to any family road trip, he made sure to have an inconveniently timed, self-performed maintenance tune-up right before leaving (particularly on his beloved minivans). From his childhood experiences growing up and working on a farm, he learned that there wasn’t anything that couldn’t be fixed (no instructions needed). He wasn’t afraid to tackle any challenge and led by example for his children. He was always so strong, and always found a way to find joy and happiness in any experience because laughing was so important to him. He was always himself no matter what, and never strayed from his morals. His legacy will live on through his family as they live to embody the lessons they learned from him. He was extremely proud of his children, and he did an incredible job alongside his wife raising them to be kind, hard working, and productive members of society. His oldest son, James Lawrence Smith II, completed a degree in Computer Science from Drake University in 2013 and a Master’s Degree in Computer Science from the University of Illinois at Urbana-Champaign in 2018 (and married Hannah Reiland, a doctor from Wisconsin, on June 24th, 2017). His second son, Nicholas Francis Smith, completed a double degree in Biological Sciences & Chemistry from Eastern Illinois University and he is now in his 4th year of medical school at the University of Pittsburgh. His third son, Thomas Raymond Smith, completed a degree in Aerospace Engineering from the University of Illinois at Urbana-Champaign in 2018 and recently finished his first year of his PhD program at the University of Colorado Boulder in Aerospace Engineering. His youngest son, Douglas Anthony Smith, will be starting his senior year at Harvard University where he has been studying computer science and will also obtain a Master’s Degree in Computer Science on graduation next May. Their accomplishments are truly a byproduct of his and Mary’s commitment to a household centered on love and support, and his children are a major part of his legacy that will live on forever due to their impact on the world and future generations to come. His famous sayings included: “Everyone puts their pants on one leg at a time” “Eye of the tiger in everything that you do” “I love you one hundred and ten percent” “Always give it your all and that’s all that anyone can expect” “Be strong and courageous, do not be frightened or dismayed, for the Lord your God will be with you wherever you go” Joshua 1:9 I will love you forever and ever, Amen. A celebration of his life will take place on June 1st. Please e-mail [email protected] for the details. "In memory and in honor of Jim's battle with kidney disease, please consider supporting the National Kidney Foundation in their mission to prevent kidney disease, improve the health and well-being of individuals and families affected by kidney disease, and increase the availability of all organs for transplantation. Donate in Jim Smith's memory at: https://www.kidney.org/donation

James Lawrence Smith (age 61) of Bolingbrook, IL passed away at his home on Friday, May 24th. He is survived by his wife, Mary Elizabeth Borio-Smith and four children, James (28), Nicholas (25), Thomas (24), and Douglas (21) as well as four... View Obituary & Service Information

The family of James L Smith created this Life Tributes page to make it easy to share your memories.

Send flowers to the Smith family.