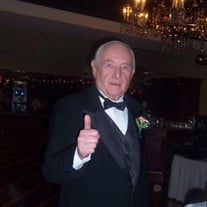 James Thompson was a Chicago Illinois born south-sider who ironically loved his north-side Cubs. While he always remained adamant about being a cubby, he was also many other things: A Mount Carmel graduate, a Northwestern University student, a dedicated worker, and a husband to Judith Thompson on 11/18. He worked for many years being employed by various companies that allowed him to explore the states and create many memories. Eventually, he would find himself at the job he worked the longest: McDonalds. During his 20 years of being proudly employed as a key component to the corporations success, he would also work on his success at home as a father to Michael Thompson in 1968, and Lisa Thompson in 1974. Finding joy in being Michaels baseball coach, and Lisa’s confidant, “Big Jim” or “The Gov” always found time to listen to music and meet his friends at the tenth hole. He would fawn over dogs as he tapped his toes to his favorite song and attempted to sing along. After he decided to retire from McDonald’s on his 20th year, he ventured out to new occupational experiences owning a pizzeria in Downers Grove, and a video rental store called “Shamrock”. Even once he decided to leave these businesses behind and “retire”, James could not idly sit by and twiddle his thumbs. Thus, he took on his final career as a Will County Courthouse Bailiff in strive and pleasure until he was 85. It was his determination to always get up and work, despite any downfalls, that truly defined James as an individual. In the celebration of his life, James left his mark as a grandfather, great grandfather, parent, friend, and confidant. On his final days, he shared his story with his youngest grandson, cracked some jokes surrounded by the family, and quietly slipped out of consciousness reminding, his family how much he loved them. In his final moments, on August 31, 2019, Jim passed peacefully surrounded by two individuals who loved him very much: His daughter, Lisa, and his wife, Judith Thompson. He shall be greatly missed. -Lisa Thompson and Jacob Thompson James is survived by his Loving wife Judith, Son, Michael (Toni), Daughters Lisa and Claudia Usrey. Dear grandfather of Jacob, Tyler, Melissa, Trevor and the late Justin. Great grandfather of Zoey and Carmella. Nephews Kevin and Daniel and niece Stacey. In lieu of flowers, donations to the American Lung Association appreciated.

James Thompson was a Chicago Illinois born south-sider who ironically loved his north-side Cubs. While he always remained adamant about being a cubby, he was also many other things: A Mount Carmel graduate, a Northwestern University student,... View Obituary & Service Information

The family of James D. Thompson created this Life Tributes page to make it easy to share your memories.

James Thompson was a Chicago Illinois born south-sider who ironically...

Send flowers to the Thompson family.