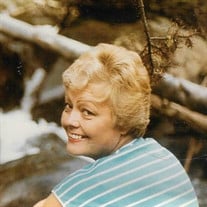 Jean Linell Honeysett (nee Erickson) passed away peacefully on Saturday, April 17, 2021. She was the cherished daughter of the late Glen and Marion (Sanborn), sister of Carole (Charles "Chuck") Biggs and Lois (Ken) Fox, loving mother of David, Karen (Chris) Sallstrom, Stephen (Jennifer), Janet, Ted Cizma (Erika), Michael (Michelle) and Tracy (Bryan) Hanny, beloved grandmother to Nicole, Dustin, Jamie, Kelly, Stephanie, Nicholas, Acacia, James, Jaime, Katie, Elaine, Grace, Jackson, Chance, Sunshine, Evan, Braeden, Lucas, Faith, Hope, Joy, Glory, Mercy, and Boaz, great grandmother to Lana, Porter, Penny, and Karter. She is preceded in death by her husbands Cushing Roth (1999) and Charles Gordon Honeysett (1991). Jean was born in LaGrange, Illinois and attended Lyons Township High School and Junior College. She later lived in Lisle, Illinois, before retiring in Brown County, Indiana with her late husband, Gordon. While living in Nashville, Indiana, she continued to work part time, both at the State Park and later at a local retail store. She loved the interaction with people from all walks of life. Her "family" in Nashville included her much loved neighbors on Artist Drive and church family at Brown County Presbyterian. In her last years, Jean moved to Romeoville, Illinois, to be closer to her family, for which they will be forever grateful. She loved to travel; she was a self-proclaimed anglophile and particularly delighted in trips to Great Britain. She loved collecting rocks, so much so that she was known to pack lightly on vacations in order to save room for bringing home her finds. She was witty and articulate, with a robust vocabulary, aided no doubt by her love of books and reading. She enjoyed games like Bridge, Scrabble, and crossword puzzles, as well as working jigsaw puzzles with far too many pieces. Jean also rarely missed an episode of Jeopardy. She loved her gardens, bight flowers, birds, and art that depicted nature scenes. She was pragmatic and independent, yet also so generous and compassionate. More than anything else, she was the rock solid center of a large and far-flung family whose members revolved around her, each with their own particular orbit--sometimes far away, but always passing close by eventually. Information on services will be forthcoming.

The family of Jean Linell Honeysett created this Life Tributes page to make it easy to share your memories.

Send flowers to the Honeysett family.