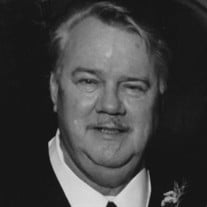 John Darwin Buck, Sr. passed away peacefully surrounded by his beloved wife and children. John was the youngest son of Arthur Chester and Laura Josephine Buck (nee Jacobsen) who settled in Warrenville, Illinois. He graduated from Wheaton Highschool in 1958 and was part of a large family of 5 older brothers (Chester, Robert, Glenn, Kenneth, Jimmy) who proudly served in WWII and the Korean War. He grew up an active boy and always loved sharing stories of his childhood spent playing along the DuPage river—fishing, swimming, ice-skating and later working on his gleaming 1957 Convertible Chevy which he raced whenever he could. He was well-known for his beautiful tenor voice, was a member of the Trinity Lutheran church choir and loved playing piano and trombone. John had a bright and curious mind and loved to learn. He was an avid reader, a historian and our family genealogist—always proud to share stories and a list of great books. He rarely let the NY Times crossword puzzle challenge him and took pride in conquering it every Sunday. All of these passions he imparted to his 5 loving children. Prior to retiring, John had an active professional life and built a successful career in management and consulting roles working for General Motors, General GMC Atlanta Truck Center, Summerfield GMC and later Coffman Brothers. John loved golf, cribbage, card games, movies, socializing, a good martini, singing, tending his vegetable garden and making his annual Norwegian Christmas bread Julekake for family and friends. He cared deeply for his country–he was a patriot, supported veteran’s causes, donated to animal welfare groups and was a firm believer in giving to those in need and cared about the world and all people. He threw his energy into the fight to end world hunger and at one point allocated storage space for an entire church food pantry at his home in Marietta, Georgia. He never met a stranger that he would not embrace or greet with a cheerful hello and was extremely loyal to his friends, co-workers, and his family. He loved birdwatching and would greet his daily visitors with an always overflowing supply of treats, tracking in a notepad all the red-tail hawks, finches and sparrows who dropped by. His memory was remarkable, and he could recall historical facts and figures with ease and speed. He dazzled everyone he met with his personality, his way with words, his playfulness, and trademark witticisms. John lived every day by the Latin maxim—Carpe Diem—words that will continue to inspire everyone who loved him. John is survived by his loving wife of over 27 years, Sheila Hammer Buck and his beloved children with his former wife, Anne Blackburn Buck—John D. Buck, Jr. (Swati), Barbara Ann LiPuma (Guy), Suzy Buck Veley, Christine Buck Grbavac (Tony), and Jerry A. Buck (Julie) and Sheila’s loving daughters Lisa Klein and Gina Callaway (Todd). John was proud of his 13 beautiful grandchildren—Amanda, Lillian, Rachel, Nicole, Dylan, Jake, Fred, Adam, Grace, Josh, Ashley, Carter and Jordan Ellis. He is also survived by his sister in laws Kathleen Bucholz, Jan (Mike) Sawitoski, and brother in law Martin (Kathleen) Hammer and many nieces and nephews. And by his side until the end, his best friend, a sweet English Springer Spaniel named Chingo, who he loved dearly. A memorial service celebrating John’s life will be held at Trinity Lutheran Church Warrenville on Saturday, January 25th, at 11:00 AM. In lieu of flowers, the family requests that donations be made in memory of John D. Buck, Sr. to The Alzheimer’s Foundation.

The family of John D. Buck Sr. created this Life Tributes page to make it easy to share your memories.

John Darwin Buck, Sr. passed away peacefully surrounded by his...

Send flowers to the Buck family.