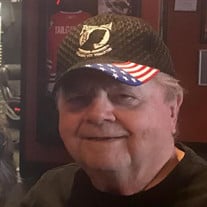 John M. Charnevsky, age 78, was the beloved husband for 42 years of Linda A. (nee Linger), cherished son of the late Stanley and the late Josephine, loving father of Michael J. (Ana Salinas) and Joseph J. Charnevsky. He always enjoyed spending time with them and talking sports. He was the loving grandfather of the late Baby James and the late Baby Charnevsky, dear brother of Marie (Marvin) Rozner and Stanley (June) Charnevsky, cherished brother-in-law to Louise (Charlie) Howe, Theresa (Bryon) Bednar, and James Counce, fond uncle of many nieces and nephews, friend to many, and missed by all. John was born on September 19, 1943 in Chicago and graduated from DeVry on May 24, 1968. He went on to serve our country and was a proud United States Army Vietnam Veteran, receiving an honorable discharge in March of 1971 and then became a distinguished member of The American Legion for 52 years. John went on to work as a Systems Technician for 33 years until his retirement in 1999 from Lucent Technologies. He continued his great work habits when he started working part-time for Connect-It for 15 more years. Visitation will take place on Thursday, January 20, 2022, from 4:00 until 8:00 p.m. Funeral Mass will be held on Friday, January 21, 2022, at 10:30 a.m. located at St. Francis of Assisi Catholic Church, 1501 West Boughton Road, Bolingbrook, IL 60490. Interment to follow at Queen of Heaven Cemetery. The immediate family is requesting for family and friends to gather directly at the church on Friday, January 21st for the 12:30 p.m. burial. Funeral arrangements entrusted to McCauley-Sullivan Funeral Home and Crematorium.

The family of John M. Charnevsky created this Life Tributes page to make it easy to share your memories.

Send flowers to the Charnevsky family.