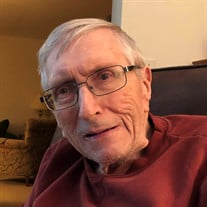 John Richard Larsen, 83, of Bolingbrook, IL, passed away peacefully in his home, surrounded in his last months of life by his wife and two daughters. Born and raised in Hinsdale, IL, John (known as “Rich” to his family) graduated from Hinsdale Central High School. He worked in his father’s store, Larsen’s Grocery in Clarendon Hills, and took a brief turn as a mail carrier before enlisting in the Air Force in 1958. Stationed at Hamilton AFB in California and Elmendorf AFB in Alaska, he worked as a mechanic on the T-33 Shooting Star jet trainer and F-89 Scorpion jet fighter. His experience ultimately translated into a career as a technician, and launched a lifelong love of travel and aviation. John went on to work as a service technician and manager for Xerox Corporation for 33 years, where he fixed copiers, printers and computers. He also helped set up one of the first Ethernet network systems in Chicago, at the offices of Quaker Oats. He met his wife Beth in Chicago, where they both lived and worked. He took her out for pizza the night they first met, sparking a shared love of going out to eat that would last their entire 52 years of marriage. In his retirement, John volunteered at SeniorNet, patiently teaching seniors how to use computers. He also volunteered restoring a T-33 jet at the Illinois Aviation Museum at Clow Airport. For fun, he loved traveling to see the Thunderbirds or Blue Angels perform, flying flight simulators on his computer, going out to breakfast with his buddies, spending time with his grandchildren and seeking out new places and interesting restaurants with his wife. He was always ready for a good chocolate chip cookie or a scoop of ice cream. He had an impeccable sense of direction, loved the WGN weather report, could fix nearly any appliance or electronics, was an expert parallel parker, and a connoisseur of quality flashlights. He was known and loved for his quiet, goofy sense of humor, and was someone the whole family could rely on when they needed him. His steady presence will be deeply missed. He is survived by his wife Beth, his daughters Kristen (Jim) Stepien and Gretchen Larsen (Karl Erickson), grandchildren Jimmy, Sera and Chloe Stepien, sister Merrie (Gene) Zell, as well as six cousins and 2 nephews. He was preceded in death by his father John A. Larsen, mother Hazel, and sisters Susie Bahlmann and Nancy Larsen. Visitation will start at 9:30am followed by a brief service at 10:30am on Saturday, May 22, 2021 at McCauley-Sullivan Funeral Home in Bolingbrook. Interment for family and close friends at Clarendon Hills Cemetery. In lieu of flowers, donations can be made in his name to the Parkinson’s Foundation, the American Cancer Society or the Illinois Aviation Museum.

John Richard Larsen, 83, of Bolingbrook, IL, passed away peacefully in his home, surrounded in his last months of life by his wife and two daughters. Born and raised in Hinsdale, IL, John (known as &#8220;Rich&#8221; to his family) graduated... View Obituary & Service Information

The family of John R. Larsen created this Life Tributes page to make it easy to share your memories.

Send flowers to the Larsen family.