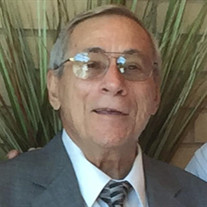 John P. Moritz JR, age 79, passed away on 03/31/2019 at Edward Hospital, due to health complications, surrounded by his loving family. John was born in Chicago, Illinois in 1939, the first born child of John P. Moritz SR and Marie Anne Lebeda. After high school, John joined the United States Air Force where he was assigned as a Mid-Air Refueling Operator and Airplane Crew Chief. John met his wonderful wife, Karen deBoer, as they both served in the 4238th Squadron, 8th Air Force, Strategic Air Command, in Barksdale, Louisiana. John and Karen were married in 1962 and after their service, returned to the Chicago Area where John worked for Xerox as a repairman and then a technical trainer until retirement. John loved history and all things to do with aviation. John volunteered his time at the First Division Museum at Cantigny, in Wheaton, IL, as a greeter and tour guide. John is survived by his loving wife Karen, brother Dennis, sister Karen, daughter Jennifer, son Jonathan (Michelle). John was blessed with grandsons Raymond and Benjamin and step-grandchildren Ariana, Daniel, and Vincenzo. In lieu of flowers, the family asks that donations be made to the Divine Shepherd Lutheran Church (985 Lily Cache LN, Bolingbrook, IL).

The family of John P Moritz created this Life Tributes page to make it easy to share your memories.

Send flowers to the Moritz family.