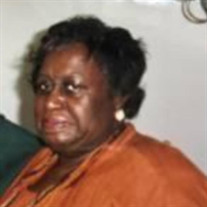 Lillian L. Morrison “Love,” was born in Macon Mississippi on October 3, 1935, to the late Alma L. Stowers-Wilbon and Johnnie Wilbon Sr. Lillian was a loving daughter and protective big sister to Linda A. Wilbon-Parker (Cecil). Lillian accepted Christ at a very early age and went to be with her Lord much too soon, on Wednesday May 6, 2020, after a battle with the Coronavirus. In 1940, Alma, Lillian, Linda and her maternal grandmother, Lula B. Stowers, migrated to Chicago, Illinois to escape Jim Crow and seek a better life. As a child, she often visited Mississippi with her grandmother, (aka Mommy). Lillian attended and graduated from, Forestville Elementary School, Du Sable High School, after which she attended Cortez Peters Business College and Loop City College. In 1958 Lillian was joined in holy matrimony to the late Charles D. Morrison Sr., the two met a year earlier on a blind date, set up by her sister Linda. This union produced three wonderful children, Anita Louise, Charles Dennis and Brenda Renee. In 1967, Lillian and Charles became proud homeowners in Chicago’s West Chatham Community, where Lillian was a staunch advocate of higher education and was heavily involved in the Hookway’s Parent Teacher Association and West Chatham Association. To this day, many still remember the spectacular Hookway Talent Shows she helped produce. Lillian likewise believed in the empowerment of young African American girls and sponsored a Camp Fire Girls of America Troop. The Camp Fire Girls organization emphasized community service, outdoor activities, self- reliance, and self-confidence. Lillian had a deep passion for the arts: music, painting, poetry, the theater and old movies. This passion for the arts and education, created a strong bond with her husband and children. Lillian was delighted in serving her community and proud that all of her children and grandchildren earned university degrees. Lillian enjoyed a long successful career with the U.S. State Department’s Passport Agency in Chicago, where she enjoyed meeting and collecting the autographs of numerous celebrities of her day, like Muhammad Ali, Redd Foxx, Professor Irwin Corey, Jonathan Winters, Charlton Heston’s mother, Jim Brown and Richard Pryor. In recent years Lillian was a resident of Meadowbrook Manor senior living facility of Bolingbrook where she enjoyed interacting with the staff and fellow residents. She participated in group activities and attended church services regularly. She made many friends while there. Lillian was humorous, intelligent, mischievous, strong-willed and as tough as circumstances required. She loved her family, friends and neighbors. She is preceded in death by her husband, Charles D. Morrison Sr., her parents Alma L. Wilbon and Johnnie Wilbon Sr., grandmother, Lula B. Stowers, brother Johnnie Wilbon Jr., sister Hazel F. Wilbon-Bradford. Lillian’s legacy shall live on to be cherished by her daughter Anita L. Morrison, son Charles D. Morrison Jr. (Abbie), daughter Brenda R. Lewis-Sesay, grandsons Donte K. Lewis, Sean T. Conley, Charles D. Morrison III, granddaughters Mabinty N. Sesay, Courtney E. Morrison, sisters Linda A. Parker (Cecil), Evelyn L. Floyd, step-mother Inez Wilbon and a host of nieces, nephews, extended-family and friends. When You Speak of Her “When you speak of her, speak not with tears, for thoughts of her should not be sad. Let memories of the times you shared give you comfort, for her life was rich because of you. A mother holds her children’s hands for a while, their hearts forever.”

The family of Lillian L Morrison created this Life Tributes page to make it easy to share your memories.

Lillian L. Morrison “Love,” was born in Macon Mississippi on...

Send flowers to the Morrison family.