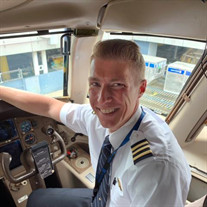 Matthew J. Berszoner, age 34, an Air Force veteran and United Airlines pilot, passed away suddenly in an accident on Wednesday, September 18, 2019. He was born in Downers Grove, IL and lived in Nazareth, PA before his untimely death. He is survived by his stepmother, Sarah Kimball, her son, Dustin (Karly) Davis ; his uncle Bruno (Jennifer) Berszoner and aunt Kris (Richard) Winiarski; uncles Jim Shostok (Nancy), Paul, Tom, Richard and Michael Shostok; cousins Charlie, Stephanie, Nicholas, Mark (Lauren), Monica, and godchild Everett. Preceded in death by his parents Mary and John Berszoner, his maternal and paternal grandparents and uncle Bob Shostok, Jr. Matt loved all things aviation from an early age, spending time with computer flight simulators and the EAA Young Eagles flight program. Matt graduated from Bolingbrook High School in 2003, was nominated to attend the United States Air Force Academy and was a 2007 graduate. He continued his dedicated service in the Air Force as a pilot, primarily the KC-10 refueling tankers, and was deployed in several campaigns in the Middle East. During this timeframe Matt earned a Masters in Aeronautical Engineering from Embry-Riddle Aeronautical University in 2011. After serving in the Air Force for 16 years, Matt joined United Airlines as a professional pilot in March 2019. Matt enjoyed flying a variety of aircraft in his free time, loved working on vehicles and spending time in his garage. Matt was kind, intelligent, dedicated, multi-talented and had a great sense of humor. He leaves behind not only his family of survivors, but his Air Force family and the many friends with bonds formed over the years. Matt was very special to all who had the pleasure of having him in their lives and will be deeply missed. Contributions to the EAA Young Eagles program or support of veterans’ programs for those in need would honor Matt’s memory.

Matthew J. Berszoner, age 34, an Air Force veteran and United Airlines pilot, passed away suddenly in an accident on Wednesday, September 18, 2019. He was born in Downers Grove, IL and lived in Nazareth, PA before his untimely death. He is... View Obituary & Service Information

The family of Matthew J Berszoner created this Life Tributes page to make it easy to share your memories.

Send flowers to the Berszoner family.