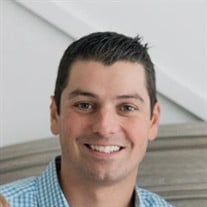 Michael (Mike) Ryan Christl, age 34 and resident of Woodridge, IL, passed suddenly on July 21, 2019 surrounded by his family in Wisconsin. He was born on September 2, 1984 to the late John Christl and Jean Christl. Mike graduated from Bradley University with a degree in Business. He worked for Quincy Recycle for nine years as a dedicated and successful Senior Director of Sales and Procurement otherwise known as “The Man”. Michael Christl, devoted husband, dedicated father that most men aspire to be, and committed brother and uncle, is survived by his wife of seven years, Brandi Christl. Doting father of MaKenzie, Addison, and Colton. Supportive brother to his siblings, Clint (Sara) Christl, Sarah (Jason) Wiertel, John (Dorothy) Christl, Patrick (Rachael) Christl, and Scott (Tiffanie) Christl. Loving uncle to all his nieces and nephews. And loyal friend to many that he considered family. Michael loved sports and was an avid fan of his Chicago teams. He received a baseball scholarship to Bradley University, was drafted by the Boston Red Sox, and then signed and played in 2007 minor league baseball for the Chicago Cubs and legend has it that he popped the mit at 95. After he “retired” from baseball, he found a new passion in golf. Mike always had a contagious smile on his face and he was bigger than the room he lit up. Visitation is Thursday, July 25, 2019 from 3:00 p.m. to 8:00 p.m. CDT at the Bolingbrook-McCauley Funeral Chapel & Crematorium at 530 West Boughton Road, Bolingbrook, IL, 60440. Funeral services are on Friday, July 26, 2019 from 10:00 a.m. to 11:00 a.m. CDT at St. Thomas The Apostle Church, 1500 Brookdale Road, Naperville, IL 60563. In keeping with his spirit of generosity and love of family, we ask that in lieu of flowers, you join us in contributing to an education fund for his children at GoFundMe: https://tinyurl.com/yybu3xby In his shortened life, Mike leaves behind a legacy of laughter, love, loyalty, and relentless passion that cannot be measured or forgotten.

Michael (Mike) Ryan Christl, age 34 and resident of Woodridge, IL, passed suddenly on July 21, 2019 surrounded by his family in Wisconsin. He was born on September 2, 1984 to the late John Christl and Jean Christl. Mike graduated from Bradley... View Obituary & Service Information

The family of Michael R Christl created this Life Tributes page to make it easy to share your memories.

Send flowers to the Christl family.