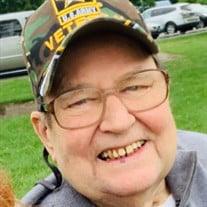 Michael C. Hickey, age 84, passed away January 31, 2021. He was the loving father of Mark (Natalie) Holmes, Dawn (John) Kopacka, Julie Levins, and David (Adrienne) Hickey, cherished grandpa of Christopher (Danielle) Holmes, Sean Holmes, Jackson, James, and Abigail Levins, Ethan, Evan, and Ellowyn Kopacka, great-grandpa of Sophia Holmes, dear brother of Mary Ann, Patricia, and Dolores, fond uncle of many nieces and nephews, dear friend to many, and missed by all. Mike was always proud that he served in the United States Army. He serviced 2 years active duty in the Army from 1959-1961, followed by 6 years reserves. Mike never missed an opportunity to thank other military personal for their service. He would always stop and shake their hand and thank them. Mike will be cremated and will have two urns. The first urn will be taken to Abraham Lincoln National Cemetery in Elwood Illinois for his final resting place. Mike will be getting a military burial. They will fold and present the American flag and play “Taps”. He might even get a 21 gun salute. Tentatively to be held in May. The second urn will be given to the B-17E Desert Rat Project Team in Morengo, Illinois. If you know Mike then you’ve heard all about “his plane”. Mike talked about how he wanted to live long enough to get a ride. Mike would have given anything to have lived long enough to see that plane fly. The project team was asked if they would accept the second urn and here was the response they sent back. ******Cheryl, Chris, Bill and I (Mike) give our sincere condolences on your loss. He was a good man. I would be honored to accept the urn and secure it on the plane, so that he will always be with the B-17 wherever it goes. I think that would be fitting. Again, sorry for your loss.****** A special thank you to the amazing people at Edwards Hospice and Palliative Care in Naperville, Illinois for their loving care and support during his final days. Also, the family would like to extend their sincerest gratitude to McCauley-Sullivan Funeral Home & Crematorium for being very accommodating, knowledgeable and supportive during this difficult time. In lieu of flowers, any donations to the B-17E Desert Rat Restoration Project Team would be greatly appreciated and help Mike fulfill a lifetime dream. Below is a link to their Facebook page for more information. https://www.facebook.com/12595DesertRat/

The family of Michael C. Hickey created this Life Tributes page to make it easy to share your memories.

Send flowers to the Hickey family.