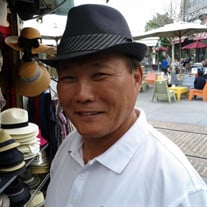 Dr. & Grandmaster Nam K. Hyong transitioned peacefully on December 27, 2020 in Naperville, IL surrounded by his loving family. Dr. Hyong was born on August 9th, 1940 in Geochang, Korea. As a youth, he showed incredible prowess in Tae Kwon Do and went on to compete and finish twice as a silver medalist in the Korean National Championships during the early 1960’s. As the son of a farmer who wanted him to follow in his footsteps, Dr. Hyong knew he was destined for something bigger. He left home at 13 for Daegu city in pursuit of life-changing opportunities in education. He supported himself by working in a factory during the day while preparing for Korea’s rigorous college entrance exams at night. His father then suddenly passed, leaving the burden of providing for his family solely on his shoulders. His Tae Kwon Do talent led to Korea University funding his studies, where he supported himself and his family by training American GIs stationed in Korea. After earning a BA in English Literature in 1967, he immigrated to the United States two years later on a full scholarship to Eureka College to study Business. He then earned his MS in Economics from Illinois State University. His initial intent was to return to his war-torn country and run for office to help the Korean people rebuild their then-fragile economy. However, as Western interest in martial arts continued to explode, he found himself running multiple academies; first at the University of Illinois at Urbana-Champaign, and then in Bloomington where he was named Chairman of the AAU; the Amatuer Athletic Union. The young Master Hyong flourished in his martial arts career, expanding academies in Peoria, Springfield, Mohammed, Decatur, and Naperville, which allowed him to sponsor his mother, younger brother, and younger sister for U.S. Citizenship. It was during this time that his fascination shifted from economics and politics to the emerging field of human psychology. He ultimately observed varying levels of personal success amongst his students despite them having similar abilities in martial arts, and set out to discover why. While developing his theory of Tae Kwon Do as an agent for behavioral change, he was personally invited to a symposium by Professor David McClelland of Harvard University. Being intrigued by McClelland’s Achievement Motivation Theory, Dr. Hyong pursued to become a Neurolinguistic Programming Certified Trainer in 1995 and obtained his Ph.D. in Psychology & Hypnotherapy from La Salle University in 1997. In 2009, Dr. Hyong achieved the highest Grandmaster status with the rank of 9th Degree Black Belt -- the highest honor that can be earned by a living master. In addition, he held several high offices as Vice President of the U.S. TKD Grandmasters Society, a Kukkiwon Research Committee Member, and was distinguished in the 2014 Grandmaster Hall of Fame. Despite his accolades, his ultimate goal was to improve the quality of his students’ lives beyond inside the dojang and in their personal lives outside the academy. He finalized his program and founded Personal Success Systems, the world’s first hybrid of Eastern philosophy and Western science. Utilizing all the resources he attained from a culmination of 40 years of studies, he developed and licensed Tae Kwon Do programs that transformed the lives of 10,000+ students over his dignified career that spanned six decades. His unique methods helped his students defeat their fears and reprogram their habits and behaviors to achieve excellence and leadership in their chosen endeavors. Even though there were talks of him being nominated for President of the World Tae Kwon Do Headquarters in Seoul, South Korea, his heart was always with the families of the communities he served. They walked through his doors in search of physical fitness and self-defense, and instead found a sense of purpose, belonging, and joy that defines his legacy for years to come. When not wearing his many hats, he loved playing tennis, cracking a joke to make a stranger smile, sipping a cold beer and singing karaoke, and captivating whoever happened to overhear one of his engaging stories. His signature spicy noodles brought together those he cherished most. He will be dearly missed, but his spirit lives on through the love of his family, friends and students. Dr. Hyong is survived by his wife, Kunwha, and three children Nahnhy, Yeonhy, and Jinho. Visitation Tuesday 9:30am until time of service 10:30 am at McCauley-Sullivan Funeral Home 530 W. Boughton Rd. Bolingbrook, IL. Interment Fairmount Willow Hills Cemetery *Maximum of 25 guests allowed in the Funeral Home at a time. All guests must wear a mask before entering the building.

The family of Dr. Nam K. Hyong created this Life Tributes page to make it easy to share your memories.

Send flowers to the Hyong family.