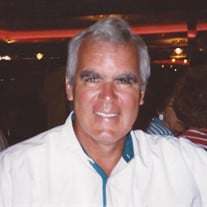 Peter J. Murray, 84, went to be with the Lord on June 20, 2019. He was born on June 17, 1935 in Lorain, Ohio, son of Peter Murray and Beatrice (Coyne) Murray. “Pete” graduated from St. Mary’s High School in 1953 and joined the Air Force, stationed in Japan. He attended Saint Joseph’s College in Rensselaer, Indiana. He married Evelyn (Simonelic) on July 20, 1963, and they settled in Bolingbrook, Illinois, raising their five children. He was a proud Allstate insurance agent for over 40 years, a private pilot, an umpire and referee, a fisherman, and an avid player of tennis and racquetball. He is survived by his wife, Evelyn, his children: Peter (Roxann), Joseph (Amy), Kathy (Mike Collins), Ann Marie (Seamus Gleeson) and Linda (William Cranley), 23 grandchildren and 2 great grandchildren. Pete is preceded in death by his parents, his father and mother in-law (Joseph and Elsie Simonelic), his twin sister Mary (Conrad), and brothers, John, Tom, and Jim, and survived by his brothers Connie, Michael and Dan. He and Evelyn enjoyed their retired years in Dania Beach, Florida. He was known as “Uncle Pete” to several and loved by so many. As Pete donated his body to science at the University of Miami, there will be a memorial service and Celebration of Life on Thursday June 27, 3-8pm at Bolingbrook-McCauley Funeral Chapel, 530 W. Boughton Rd. Bolingbrook, IL 60440. There will be a memorial mass on Friday June 28th, 10am at St. Dominic Catholic Church, 440 E. Briarcliff Rd. Bolingbrook, IL 60440. In lieu of flowers, please consider making a donation in Pete's name to the charity of your choice.

The family of Peter J. Murray created this Life Tributes page to make it easy to share your memories.

Send flowers to the Murray family.