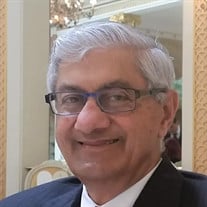 Ramanujam passed away at Edward Hospital on October 7, 2019. Raj Sekar was the cornerstone of our family, and words fall short in describing how he quietly supported and cared for everyone around him. He was an extremely devoted husband, father, brother, and friend to all those who knew him. He married his beloved wife and partner Revathy Sekar in 1972, and they had one daughter, Priya. Raj, Revathy and Priya have travelled together to many wonderful places around the world, many times accompanied by other family and friends. He was quick to help, never short on corny jokes, and never expected anything in return. He was the first in his extended family to immigrate to the United States from India in 1967, with “six dollars in his pocket”. He was one of five siblings, raised by his mother and older sisters in the most challenging circumstances in Coimbatore, India. His excellent academic achievements gave him the opportunity to come to the US. He really lived the American dream, and only bought American-made cars and products. After graduating from engineering college in Coimbatore, India, he came to Madison, Wisconsin where he got his Master’s degree in mechanical engineering. Interestingly, his mother tongue Tamil was also his passion, and he often said that he would have been happy formally studying his native language. He moved to Columbus, Indiana for his first job with Cummins Engine Company, and diesel engines remained his passion throughout his career. He went on to get his MBA at Indiana University while at Cummins. In the midst of this, he participated in a family venture by opening up the first Indian restaurant in Indianapolis, Indiana named Ashoka’s. Although Ashoka’s has since closed down, it is a source of many fond memories for the family. He moved to Illiniois in 1985 to start an engine research program at Argonne National Laboratory that has exponentially grown since its conception. While Raj was instrumental in developing multiple patents and numerous publications, those who knew him would probably first think of his quiet smile and eagerness to help however he can. His devotion to his wife Revathy through her significant medical challenges embodies true love, and his quiet gentle spirit is an inspiration to all who are blessed to have known him. Although he passed away from cardiac arrest and pulmonary complications, he had a beautiful heart in the ways that matter. Raj will be incredibly missed, and we are all better to have known him and live by his example. In lieu of flowers, the family has requested donations to be made to the Pulmonary Fibrosis Foundation at the link below. https://app.mobilecause.com/vf/PFFTribute/RajSekar

Ramanujam passed away at Edward Hospital on October 7, 2019. Raj Sekar was the cornerstone of our family, and words fall short in describing how he quietly supported and cared for everyone around him. He was an extremely devoted husband, father,... View Obituary & Service Information

The family of Ramanujam Raj Sekar created this Life Tributes page to make it easy to share your memories.

Send flowers to the Sekar family.