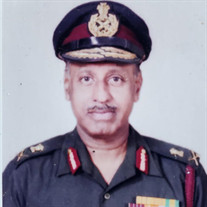 Lt. Gen. (Retd.) T. Ravindranath, AVSM, VSM, MDS, FADI passed away on Friday, April 16 2021, in Chicago, USA, after battling cancer. He was a ground-breaking leader, a decorated soldier, an accomplished innovator, an exceptionally skilled prosthodontist, and a deeply loving and caring person. During his nearly 36 years within the Army Dental Corps (ADC) he served with distinction in several high-altitude and operational border areas. His technical prowess as a prosthodontist was recognized with several high-profile postings, and he treated multiple top Indian Government officials, including two Prime Ministers, and the President of India - for whom he was the personal dentist. His interest in applied research led him to be deputed to the Defence Research and Development Organization (DRDO) where he rose to become the Director of the Institute of Nuclear Medicine and Allied Sciences (INMAS). At INMAS his signature accomplishment was the introduction of indigenous titanium based implants and bone plates to India. These implants were extensively used within the defence services, and eventually also commercialized for public use. He also led several projects in the fields of nuclear medicine, and published his research in national and international conferences. He also became the Chief Executive of the Society for Biomedical Technology (SBMT). His leadership and excellence were recognized with him becoming the first ever Lieutenant General (Lt. Gen.) from the ADC, and with him being awarded the Ati Visisht Seval Medal (AVSM) and the Visisht Seva Medal (VSM) from the President of India. Post his retirement, he served as the Director and Principal of the Army College of Dental Sciences (ACDS) where he turned around the institute, and made it one among the top dental colleges across India. He was a natural born leader, always leading from the front, unafraid to explore the unknown, communicating a bold vision, and establishing the path for many others to follow. He took great pride in both institutional accomplishments as well as the career development opportunities he provided to hundreds of officers and researchers - training them to achieve excellence. He was also a fantastic teacher, making sure his students learnt the technical fundamentals as well as the best principles of being doctors, dentists and researchers. He was a devoted family man - the oldest boy among nine children - ensuring that each of his siblings (and numerous other cousins) had all the resources they needed to achieve success, and making sure to take care of his parents through their life. More than all, he was a truly loving husband and a wonderful father, doing everything he could to make sure that we were healthy, happy and successful. All of our successes in life are because of him, his support, his planning and his vision. He lived life to the fullest, loved to laugh, to travel widely, watch movies, and to spend time with his friends and family. He was the life of every party, the first one on the dance floor, and among the most gracious of hosts ever, as all his many friends will attest. He is survived by his wife Dr. T. Sudha, and his sons Deepak and Kiran and their families. Funeral rites will be performed on Monday, April 19, in Chicago, USA. Condolences may be conveyed to Deepak (+1-412-414-8231), Kiran (+1-443-413-2052) or emailed to [email protected] The family has requested that in lieu of flowers, please keep him in your thoughts. Funeral arrangements entrusted to McCauley-Sullivan Funeral Home & Crematorium.