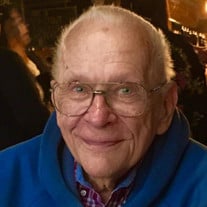 Robert ‘Bob’ A. Smith grew up in the Belmont/ Central neighborhood of Chicago on Parkside Avenue with his mother Agnes (Kiecal), father Bruno, and brother Bruno ‘Junior’. Bob attended and graduated from Saint Michael’s High School and began his career with the Chicago Welfare Department, at which time he met the love of his life, Jane Ferguson, on a blind date in February, 1955. Bob and Jane married on July 14, 1956 in Chicago, a commitment of 57 years that was blessed with son Robert M. Smith, daughter Katherine (Smith) McEwen and four grandchildren, Rebecca Pruim (Justin), Brooke McEwen (John Shusterich), Kelly McEwen, and Adam Smith. Bob worked in a variety of information technology positions in leadership roles including Robert Bosch where he worked with some of the earliest computers. He was often teased by others for working in a field that would “never take off”. He had the last laugh, making a career of it. He later retired from Champion Parts Rebuilders from a similar role. Bob possessed a keen intellectual curiosity, which manifested itself through his photography, news sense, stamp and coin collections, and affinity for classic films, musical theater and history. His cleverness and wry sense of humor was a fixture of conversation and letter exchanges with family and friends. Family was important to Bob. He and Jane made frequent trips to Ludington, Michigan, where they had bonfires on the beach and played miniature golf with nephews Tim and Eric Ferguson. He loved Chicago and all that the city offered. He and Jane frequently took their grandchildren downtown Chicago to see the skyline, lakefront, and museums during summer vacations. Bob hosted many a spirited pinochle and bingo game, some with American history- themed clues for bonus prizes at family gatherings in Florida and Illinois Beach State Park. After traveling to Vermont, Wisconsin, Ohio, and central Illinois for his grandchildren’s college graduation ceremonies, Bob fulfilled his lifelong dream of visiting Fraunces Tavern in New York City, standing with his children and grandchildren where George Washington once bid farewell to his troops. Bob is survived by his son Robert M. Smith (Paula Jarzab); daughter Katherine (Smith) McEwen; grandchildren Rebecca Pruim (Justin), Brooke McEwen (John Shusterich), and Kelly McEwen; and nephews Tim, Eric (Mary), Danny, and Michael Ferguson. Bob was preceded in death by his parents, brother, wife, and grandson Adam Smith. Memorial Visitation Friday, August 27, 2021, from 4 pm until 7 pm, McCauley-Sullivan Funeral Home, 530 W. Boughton Road, Bolingbrook, Illinois, 60440. Funeral Service at 12 pm on Saturday, August 28, 2021, at The Wayside Chapel at The Center, 12700 Southwest Highway, Palos Park, Illinois 60464. Entombment will take place at Resurrection Cemetery-Romeoville, Illinois at a later date. In Lieu of flowers, donations can be made to the American Cancer Society 225 Michigan Ave #1200, Chicago, IL. 60601, but, the family would like to thank those who have already purchased a floral arrangement. The family would like everyone to wear a facial mask throughout all of the services. In addition, they would like family and friends to refrain from personal contact, except for cordial elbow bumps, as well as practice social distancing throughout the funeral home and The Wayside Chapel. They want to ensure everyone's safety. Funeral arrangements entrusted to McCauley-Sullivan Funeral Home and Crematorium.

The family of Robert A. Smith created this Life Tributes page to make it easy to share your memories.

Robert ‘Bob’ A. Smith grew up in the Belmont/ Central neighborhood...

Send flowers to the Smith family.