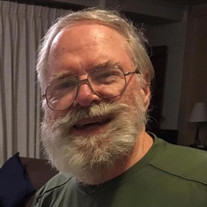 Steven Robert Caron, age 72, born in Manteno, Illinois, was the beloved husband of Debra (nee LaCost), cherished son of the late Robert and the late Bernita, loving father of Shelly (Scott) Sargent, Robert (Corinne), Glynn (Ruth), and Stephen (Jamie), dedicated grandfather of Thomas, Emily Sargent, Alyssa, Michael, Amber, Robert, Jr., April, Ritchie, and Logan, proud great-grandfather of Oliver, Malcom, and Tucker, dear brother of Alan, Marianne, the late Brian, and Vincent, fond uncle to many nieces and nephews, cousin and friend of many, and missed by all. Steven was a proud member of the Mechanics Local Union 701. He was also an avid pilot. He loved being in the air with his planes. Steven also was a Ham radio operator. Finally, he loved the outdoors and was a camping enthusiast. A Memorial Service will be on Saturday February 5, 2022 at 2:00pm with Meal to Follow. The Compass Church 151 East Briarcliff Road Bolingbrook, IL. 60440. In Lieu of flowers, donations can be made to Steven's grandchildren's college fund. . Funeral arrangements entrusted to McCauley-Sullivan Funeral Home and Crematorium.

The family of Steven Robert Caron created this Life Tributes page to make it easy to share your memories.

Steven Robert Caron, age 72, born in Manteno, Illinois, was the...

Send flowers to the Caron family.