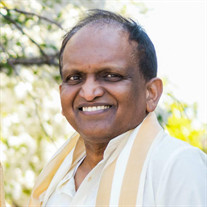 Dr. S Skanthakumar, 61 years of age, residing in Bolingbrook Illinois, passed away on Tuesday January 18, 2022 at his place of work, Argonne National Laboratory. He was born in Tokyo, Japan on January 15, 1961, to Suntharalingam and Selvaranee. He was married to Karthiga in 1996. Skanthan, as he was known to his loved ones, moved to Sri Lanka as a young child and attended the University of Peradeniya in Sri Lanka, where he received a Bachelor of Science degree in Physics. He then worked as an assistant lecturer and later attended University of Maryland in Baltimore, Maryland where he earned a masters and a PhD in physics. He spent the vast majority of his career at Argonne National Laboratory in Lemont Illinois, his research focusing on both chemical and physical properties of rare earth and actinide elements. In the course of his research, he made seminal contributions to the development of high energy X-ray scattering techniques and analysis for the determination of molecular structures in solutions, winning multiple research awards in the process. He was an invaluable member of the Heavy Elements Chemistry research group, a mentor to so many in the scientific community, from graduate students to post doctoral fellows to visiting research scientists. He was an esteemed member of the research community, a friend to his many colleagues, and selfless in his assistance to them, whether inside or out of the laboratory. He has touched the hearts of many through his passionate work, advocating for human rights in Sri Lanka for decades. He was also very instrumental in promoting Tamil culture throughout his community and ensuring that it was always robust wherever he went. Skanthan is survived by his beloved wife, Karthiga, children Aerahan, Shama, and Subash, father Suntharalingam, and sisters Vasuki and Mythili. He was preceded in death by his mother. Visitation will be held at the McCauley-Sullivan funeral home on Saturday, January 22, 2022, between 12:30 and 3 pm. In lieu of flowers, donations may be made to Manitha Neyam Trust at www.manithaneyam.org. Manitha Neyam is a charity that runs numerous projects in Skanthan’s home country of Sri Lanka to help the most vulnerable. Given how he tirelessly fought for these exact people, we believe this would be the best use of any resources. Funeral arrangements entrusted to McCauley-Sullivan Funeral Home and Crematorium.

Dr. S Skanthakumar, 61 years of age, residing in Bolingbrook Illinois, passed away on Tuesday January 18, 2022 at his place of work, Argonne National Laboratory. He was born in Tokyo, Japan on January 15, 1961, to Suntharalingam and Selvaranee.... View Obituary & Service Information

The family of Suntharalingam Skanthakumar created this Life Tributes page to make it easy to share your memories.