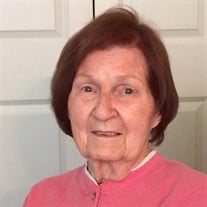 Theresa Thompson was born into the fun, boisterous Kelly family of 10 Children almost 89 years ago. They included Kitty (Jim), Bud (Marie), Cy (Mary), Patsy (Steve), Jimmy (Pat), Patrick (Roberta), Margie (Louie), Denny (Bonnie), and baby sister Eileen (Al). As the family grew and grew they enjoyed larger and Louder family gatherings, highlighted by their mother (also named Theresa) playing the organ, while father Thaddeus played harmonica. The children danced. Terry married James Thompson in 1949 and a few years later they purchased her parents’ home at 52nd and Kostner in Chicago. That brick bungalow, with the basement flat that Jim built, became a second home to so many friends and family members that Terry had to post a long list of surnames on the mailbox to reassure the postman that yes indeed, he was in the right place. Jim and Terry raised their three children with love in that Chicago bungalow. Son Michael, and daughters Carolyn (Tom) Bara and Susan (Rick) Rotunno. She also was a beloved Aunt to many, especially Al, Tony, and Lori. At almost 40 years of age, Terry bravely took driving lessons with son Michael so the family could purchase its first automobile and travel further than the CTA would carry them. In their retirement years, Jim and Terry moved to their home in Bolingbrook, to be closer to the daughters they loved. Like other members of her generation, Terry witnessed some amazing changes in her lifetime. All to a soundtrack provided by her favorite, Ol’ Blue Eyes. Jet travel, television, computers, cell phones and men walking on the moon. But by far the most important events Terry witnessed were the arrivals and blossoming lives of her seven precious grandchildren. Matthew (Jennifer) Bara, Dustin (Brandi) Rotunno, Laurel (Chris) Lochner, Allyce (Jon) Hemm, Kirsten (Zach) Peterson, Michael Rotunno, and Lauren Rotunno. Each grandchild was welcomed to this world with a colorful afghan, carefully crocheted by Terry’s loving hands. There would be more and more afghans to create, for her great grandchildren... Tyler, Troy, Braelyn, Bradley, Nolan, Raegan, Charlotte, Theo, Holden, and soon to arrive Baby Peterson. Terry quickly earned the title of World’s Greatest Grandma, always at the ready to provide childcare, baked goods, family meals, and the best sleepovers - powered by her beloved Beta-Max video recorder. Her Grandchildren and Great Grandchildren were by her side in her final days, so that Terry knew just how much she was loved. Terry’s visitation and interment at Abraham Lincoln cemetery will be private. In honor of the many wonderful caregivers who were there for Terry during her time in hospice care - and in lieu of flowers and cards – her family asks that you consider a donation to the GoFundMe page of a very special person we recently came to know about. Jo Calucci is a caregiver for good friends of ours. Her daughter, Rosie, has experienced devastating medical challenges which are ongoing. After spending days and nights as a single mother caring for her two daughters, Jo works as a caregiver for other special needs children. You can read more and make a donation at the link below or google “A Home 4 Rosie”…. https://www.gofundme.com/ahome4rosie?utm_source=facebook&utm_medium=social&utm_campaign=fb_dn_postdonate_r&fbclid=IwAR1EmVLZjMEAP3Q_WSudAtDedQwtWl4kbVDtw1E9hxucKwi5TB5_Jjj5d2k Thank you, The Thompson Family

The family of Theresa Helen Thompson created this Life Tributes page to make it easy to share your memories.

Theresa Thompson was born into the fun, boisterous Kelly family...