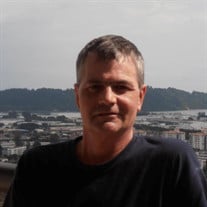 William Christopher Shaw was the first-born son of Alvin and Darlene Shaw and the admired big brother to Ron, Mike, Mark, Karen, and Ken. No one ever called him that full, formal name, except maybe his mom when she was annoyed. To all who loved him, he was Bill or Billy. Bill was born in Dekalb on August 14, 1958. The family moved to a small subdivision in the middle of a corn field to what eventually became the village of Bolingbrook. That small ranch house, whose backyard bordered on a farm field in the early years, was Bill’s only home for most of his life. He and his wife, Monica, purchased the house in 1990 and lived there together until Bill’s death. He was a music lover from childhood, playing trumpet in elementary, middle, and high school bands. He also taught himself to play a variety of instruments, including guitar, flute, and keyboards. He enjoyed a whole spectrum of music from the rock n roll of his youth through the gospel music enjoyed in the last decade. Bill was in the first graduating class of Bolingbrook High School in 1976, and he went on to study electronics and engineering at the Devry Institute. He began a technical career at Wescom and moved to Tellabs when it was an embryo of the multinational corporation it is today. Bill worked at Tellabs the rest of his career, eventually earning the title of engineer despite never earning that degree. He retired after 35 years of service. Early in his career at Tellabs, Bill met Monica, the love of his life. Monica and Bill dated for seven years and got married in September 1989. Throughout their almost 33 years of marriage, Bill and Monica were not just husband and wife; they were best friends. They spent all of their free time together, being furbaby parents to many wonderful pets. Monica faithfully cared for Bill in his last days as he struggled with the disease that took his life, and she was with him when he breathed his last and left for a better place. We will always remember Bill as a teaser and tormenter of cats and younger siblings alike. He was a defender against bullies. He was the leader of the pajama band. He liked a cold beer, maybe too much, but that was just one of the ways he was his father’s son. He was a humble Christian, aware of his brokenness, He was brilliant in conversations without saying much at all. He was a fan of 1960s Mustangs. He was a master with a soldering iron and computers. He loved many dogs, a few cats, a noisy family, and one lovely, tall woman. He will be missed. He won’t be forgotten. Celebration of Bill’s life will be held on Friday, May 21 at Veterans Woods-Trades Corners, Romeoville, IL 3:00 PM to 7:00 PM Funeral Service to be held Saturday May 22 at Peoples Community Church, 670 Lambert Road, Glen Ellyn IL 11:00 AM. Private internment In lieu of flowers, the family has requested donations to be made in Bill’s name to: Peoples Community Church: http://pcc-online.org/donations/ Arrangements Entrusted to McCauley-Sullivan Funeral Home

William Christopher Shaw was the first-born son of Alvin and Darlene Shaw and the admired big brother to Ron, Mike, Mark, Karen, and Ken. No one ever called him that full, formal name, except maybe his mom when she was annoyed. To all who loved... View Obituary & Service Information

The family of William C. Shaw created this Life Tributes page to make it easy to share your memories.

William Christopher Shaw was the first-born son of Alvin and...

Send flowers to the Shaw family.